I was up before dawn for a CT (chemical toilet) run to Rouffignac (sorry, it’s a fact of life and has to be done) and after a brief breakfast, as the promised rain still hadn’t arrived, I thought it would be a good time to put into action an idea that I had yesterday.

My water standpipe was more or less just sticking out of the ground and already I was finding it a bit messy standing on bare earth to fill my water containers. As the Véolia guys hadn’t done a very good job of tidying up before they left, I thought that I could kill two birds with one stone by removing all of the rocks that they’d left strewn all around, ‘landscaping’ the area around the tap as best as possible and laying some paving slabs to make a platform to stand on.

So that’s what I did. I started before the rain arrived and finished in a light drizzle. I’d brought all my unused paving slabs with me when I left my house in Plazac and used six of them to lay a small platform around the tap and the box that contains the water meter. I also had to lower the small round black cover adjacent to the water meter box that houses the master valve because it was sticking much too far above the surface of the ground. Here’s how things finished up. 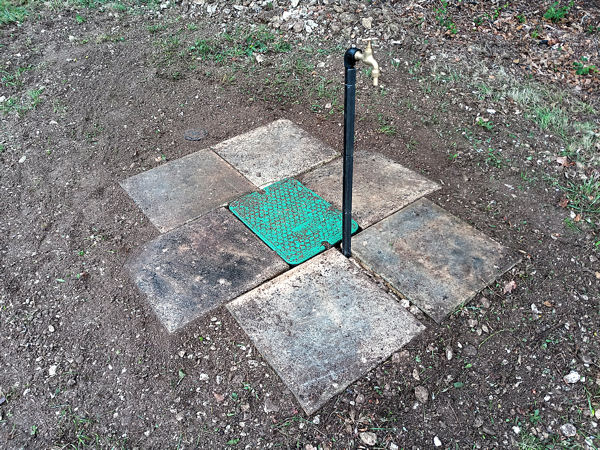 It’s not perfect – I could do with a bit more soil for a start to build up the surrounding area – but it’s better than before. The other thing is that it will be a great help when winter comes and the weather deteriorates and also when builders with big boots start using the tap during my house construction – whenever that might be…