When I typed my last post I thought that by now I’d at least have a ferry booked to return to France or might even have already left by now. Instead I’m still here in Kent and there are two reasons for this. Firstly, we’ve had some diabolical rain and wind over the last day or so and I couldn’t leave 24ZN parked outside in the open where it has been for anything up to three months without being able to check on it while it was being battered by the weather.

Secondly, the weather forecasts have been indicating the possibility of a lull in the bad weather for a few days next week and after waiting so long for such an opportunity I couldn’t pass it up even though I’ve been caught out so many times in just the same way over recent weeks.

A final clincher was that I’ve been promised that if I do have to leave the aircraft parked outside at Clipgate it can be moved in the next day or so to a more sheltered spot and when that happens, I want to be there to make sure that it is done carefully and safely. Remember, when the time comes I’ll be taking off and embarking on a Channel crossing within a few minutes and I don’t want the aircraft to have incurred any damage beforehand that I don’t know about.

So I drove over there this afternoon and I was very pleased to find that in the absence of wind and rain, 24ZN looked perfectly OK and showed no signs of having been affected at all by the recent weather. Here are some shots that I took which show what I mean. 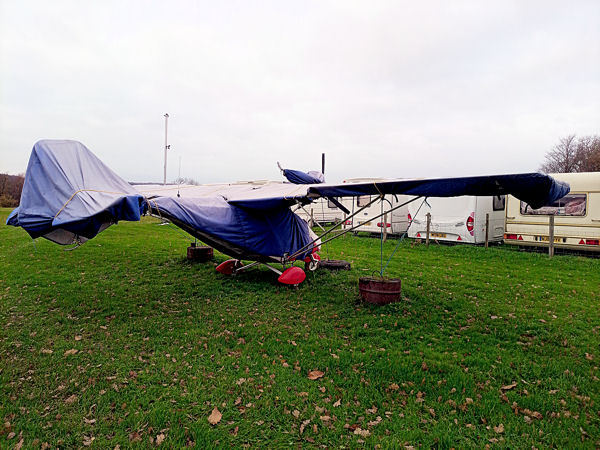 There’s also a possibility that if I don’t get away next week (my goodness, after waiting so long I think that I at least deserve to), as 24ZN will be there for around 3 months and won’t be flown in all of that time, there might be enough space for it in a corner of Clipgate’s new hangar. If so, that would suit me very well so now it’s just a matter of keeping an eye on the weather and seeing how things work out.

One thought on “Can’t be too hasty”