I’m trying to systematically cover the whole of the local area around Galinat and where I live so I can eventually get to know it and the local landmarks. Once you’ve done that, flying becomes so much more relaxed because you’re never uncertain of your position, plus you can also spend more time enjoying the scenery. I’ve initially covered the western and south-westerly sectors during my flight to Cavarc and my recent local jolly with Wim, so I thought it was now time to head north.

Although I came down from the north in MYRO, I don’t remember very much about it because the vis wasn’t very good and also it was well over a year ago. So I’ve had a short flight planned to remedy that and after waiting a short while for the haze to clear a bit this morning, during which time I did my earlier posting, I decided that I’d do it this afternoon. Here’s a picture showing my planned route in green and my actual track in red. 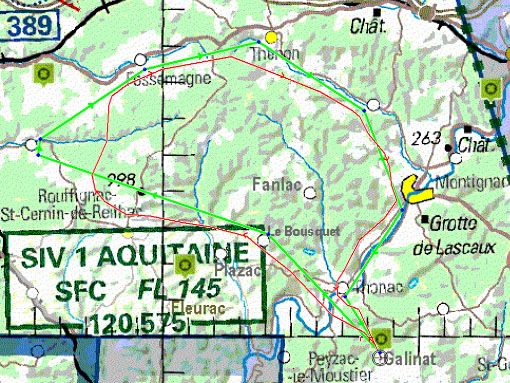 As you can see, I initially planned to head north-west up to St Geyrac which is a very small village on the way to Perigueux from Rouffignac. In the event, having flown closer to Rouffignac than I’d originally planned to, I decided to give St Geyrac a miss this time, cut the corner and head straight round to Fossemagne. This is a village on the road east from Perigueux to Brive and I’m afraid that having driven through it, it doesn’t seem to have an awful lot to commend it. However, here’s a picture that I took of it.

The next place on my planned route was Thenon. This is another village that people tend mainly just to drive through because it straddles the main road and it’s also where you turn right if you’re coming from Perigueux and heading for Montignac. Here’s a shot that I took of it today. 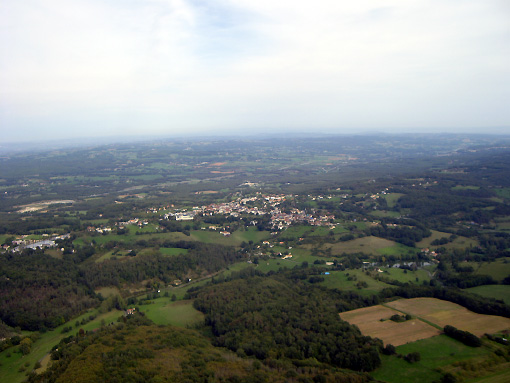 The road from Thenon to Montignac is fairly flat because it follows a tributary of the river Vézère. There are low hills on either side and roughly mid-way between Thenon and Montignac is the village of Auriac-du-Perigord which is really just a sleepy little hamlet. I don’t think that I’ve ever seen more than a dozen or so people there whenever I’ve driven through it, and that was when there was a group of men playing boules in the village centre. However, it’s very pretty and like all of the small villages in the Perigord, beautifully maintained and looked after. Here’s the picture that I shot of it.

I then continued on to Montignac which is always worth a fly-by. The picture that I shot today was considerably better than the last time because it was lighter and I was also flying lower than before. 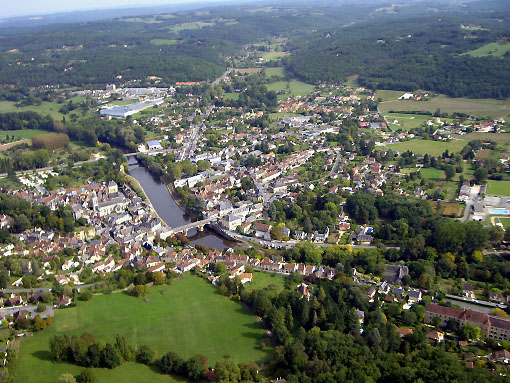 The same is true for the Chateau de Losse which I took a shot of as I headed back towards Thonac for my approach back into Galinat.

The whole flight took only 40 minutes and I enjoyed it immensely. Having the rudder pedals a bit closer was much more comfortable and, as expected, my toe brakes were much more effective as well. It took me only 15 minutes to get the covers off 56NE and ready for flight as I’d already fuelled up during my previous visit to Galinat. It took 40 minutes or so to get the aircraft parked up and covered which I’m sure I’ll be able to get down to around 30 minutes in the future. I’ve moved it round to the side a bit away from Regis’s ‘hangar’ as I’m sure he’ll want to park his Zenair there, which is now at Galinat. For the time being he’s parked it up high on an up-slope, which is not very satisfactory, and I’ll also have to take some concrete blocks to the airfield so Regis can have his ones back to tie his aircraft down with. And I’ll also have to let him have his wheel chocks back so I’ll need to make some of my own. But I don’t think that that should be too difficult 😉