The weather forecast for today was excellent – bright sunshine, clear sky and very little wind. First thing this morning I looked out onto zero visibility in fog but you could see that it would soon burn away as the sky above it became more and more blue. I needed to sort a couple of things out and then go down to Intermarché to pick up a couple of items and get some fuel and it was lunch time before I got back. I gave Wim a ring and he said that he’d just got back in from Galinat after he and Regis had been flying Regis’s Zenair, so I decided that in that case I might as well take my time and go for a late afternoon flight when hopefully it would be less thermic as the power of the sun reduced as time went on.

By the time I’d had a chat with Fred, who has a low-wing, single engine aircraft whose type I don’t know in the hangar at Galinat, and got 56NE fuelled up and pre-flighted, it was gone 4.00 pm but whereas I thought that conditions would be calming down by that time, in fact the opposite was happening. While I was getting ready the sky began to fill rapidly with cloud and quite a noticeable north-westerly wind began to build up. This was fine for take off but it meant that there would be a reasonable tail wind with gusts when it became time to land. Nevertheless, I decided to go for the flight I’d planned at short notice, a bit earlier, as below. 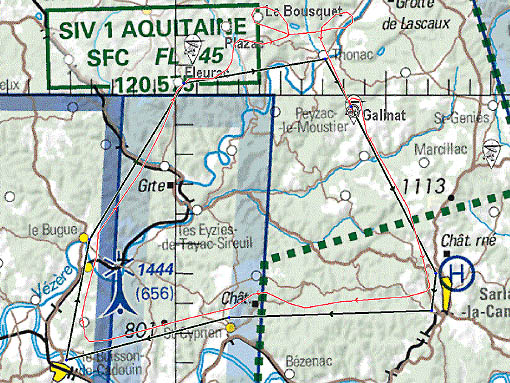 My plan was to turn onto a south-easterly heading immediately after take off and head down to the town of Sarlat-la-Canéda, the second town in the Perigord after Perigueux. Then I planned to run westwards past St Cyprien and the TV mast south of Le Bugue as far as le Buisson-de-Cadouin before turning north to head past Le Bugue itself up to Fleurac and then back to Galinat. You can see from the above image that I more or less did that but having got to Fleurac, I then decided to head over to Plazac before doing a circuit around my house and another just to the north-east of Thonac, before heading back to land at Galinat.

I was able to take a few photos during the flight, but not without some difficulty, because with the increasing cloud there was a lot of lift and sink about, making for very bumpy conditions. And every time, just as I was about to take a picture, I hit one or the other, of course. I also had to be a bit careful because even though I’d cleared my pitot out, it still wasn’t giving a proper reading, so in effect I had no airspeed indicator while this was going on. The first shot below is of Sarlat-la-Canéda. 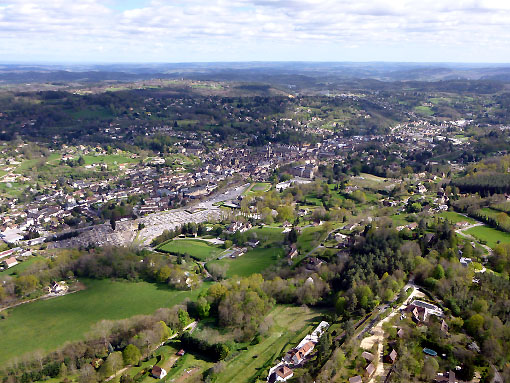 Then St Cyprien. I diverted a bit to the north as my red track line shows, to take a shot or two of a pretty little chateau but it was so bumpy that none of them came out well enough to use. 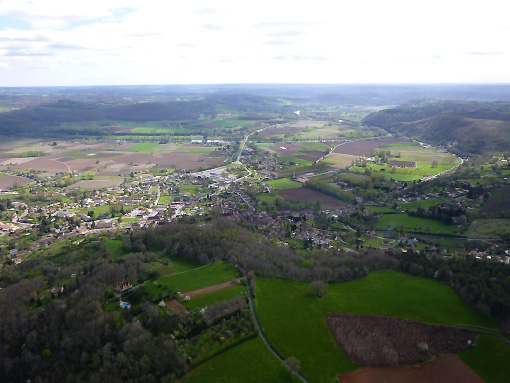 I went as far as Le Buisson as I’d planned but it didn’t have a lot to offer, so under the circumstances, I didn’t bother taking any pics. So next, Le Bugue. I flew over Le Bugue on my last flight but forgot to take my camera on that occasion. This time I did get a good shot or two. 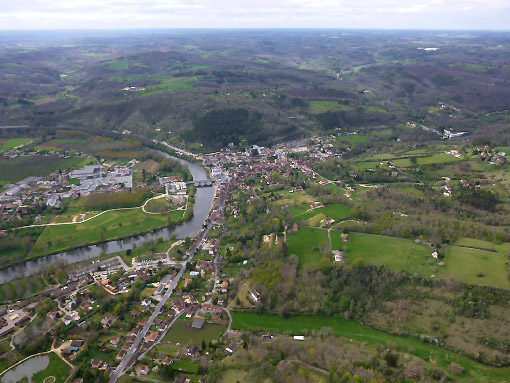 Finally, Fleurac and its chateau. It’s actually only a tiny little village. Wim and Victor both live outside it in the surrounding countryside. 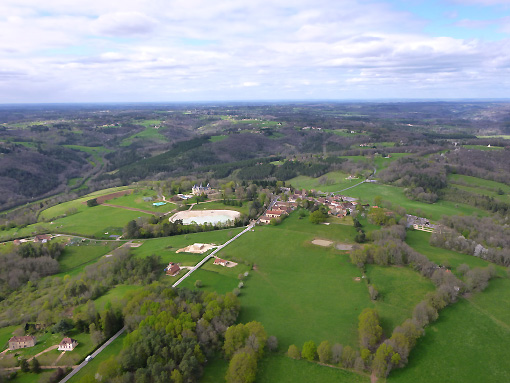 After flying around a bit more, it then came time for the usual long approach to land at Galinat. With the tail wind, I found that the approach was not just at a faster ground speed than last time but was also quite a bit more turbulent. I guess that one just has to get used to this around here, because it’s not for the faint-hearted with a lot of lift/sink bumps and wing-rocking turbulence. As I was holding off for the landing, I don’t know whether the tail wind dropped or what, but all of a sudden I found some unexpected lift causing an enormous balloon before the main wheels eventually hit the ground with a bit of a thump. Not a bad landing actually under the circumstances and certainly no harm done.

I taxied back to the apron and had parked 56NE, refuelled it and was covering it up when I had a very pleasant surprise. A car drove up across the grass of the apron and a gentleman got out and came across to introduce himself. It was André who is now 90 years of age and still flies from Galinat. He has an aircraft with folding wings a bit like a Pou de Ciel, that is kept under cover close by and every now and again he gives it an airing. We had a good old natter and he told me that he’s flown just the once so far this year but looks forward to doing so quite a few more times as the season progresses. He thought that the winds were far too tricky for him today, and he was right because they had given me a bit of a bumpy ride. Not beyond limits yet, though, for this old ULMiste 😉