Today was Armistice Day in France, a ‘jour férié’ or national holiday. And it was also one of the nicest days we’ve had for several weeks, with bright sunshine, blue sky and very little wind. So it was the perfect day to do the flight south that I’d had planned for weeks but had been unable to do because of the fickleness of the weather over that period. The route I had planned is shown in the pic below. 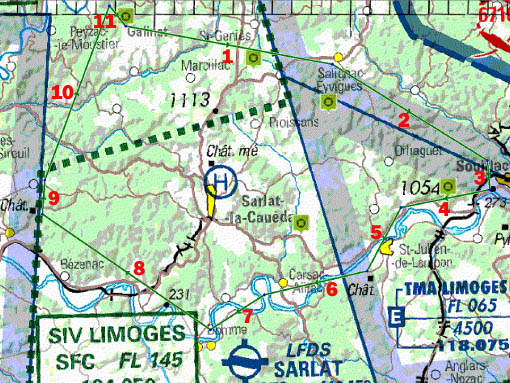 I followed my plan pretty closely but as the flight progressed it became rather chilly, so I did cut one or two corners. I had to put on my gloves in the latter stages which then prevented me from taking photographs, but I did manage to take a few before then. First, the village of Salignac, not particularly remarkable but I took the picture to test out my new little Lumix camera as much as anything else.

Then onwards to Souillac, more of a small town than a village and mainly noteworthy for being the last stop on the railway line from Toulouse to Brive and a staging post before the A20 motorway when heading south. I didn’t get as close as I wanted to because by then I was beginning to feel the cold a bit. 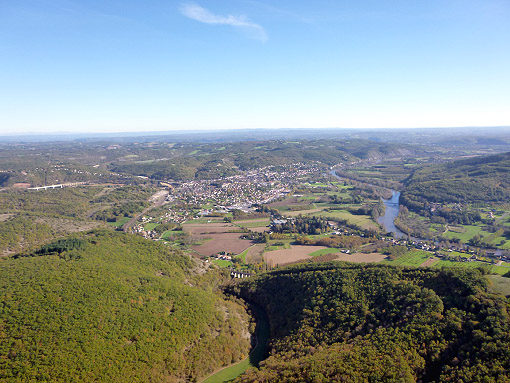 Although it was very picturesque as I flew along the Dordogne between Souillac and Domme, I didn’t take any pictures. The main reason was that as I was flying over thick trees to the north of the river, it was cold and surprisingly bumpy. I was at about 1900 feet at that time and I found that it was warmer when I descended a bit to around 1500 feet, and the other advantage was that at the lower altitude, I could smell the smoke from all of the wood burning stoves that were in action below.

I did take a few pictures, though, as I approached the Chateau de la Roque which is situated between Domme and St Cyprien high on rocks on the north bank of the Dordogne. I didn’t get close enough this time to do it justice but I made a mental note to make sure that I do in the spring or summer when the weather is warmer and more favourable. 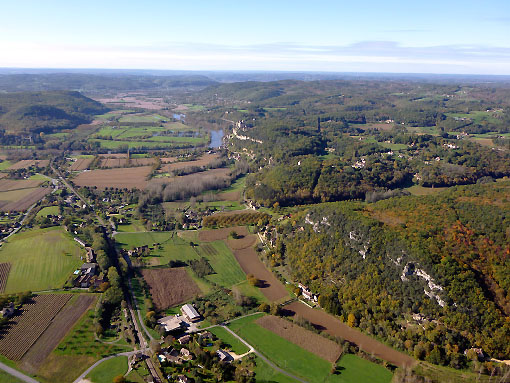 It was after I’d passed the chateau and turned north to head back to Galinat that I realised looking down how few areas there were that were suitable for use in the event of a forced landing. Surprisingly, I now realise the more I fly in the Dordogne that this is not usually the case, but on this leg of my flight there were mainly just large areas thickly covered with trees and very few open spaces between them that you could land on. So it was with some relief that I eventually found myself overhead Sergeac as I approached the final stage of my flight. As I looked for Galinat I found that as on previous occasions, I’d have to climb to get myself onto what I regard as a safe approach into Galinat ie on the high side for safety so that I’m on more of a glide type approach making me less reliant on the engine. I’ve decided after today that I must always aim to be at 1500 feet or possibly even a tad higher, by the time I turn onto long final.

I landed safely and could have landed a bit longer than I did, as the grass on the runway was both quite long and wet. As were my feet after I’d parked 56NE up, tied it down and put all of its covers back on. I just wish that I could find a pair of boots (in my budget range!) that are waterproof 😕

Tomorrow I really must do the work needed to finish my wood burner install. I now have another reason for doing so, namely that there’s something wrong with the flue. I’m not getting anything like the heat from the stove that I was originally and also, if I open the door to add more wood when the stove is burning, clouds of smoke come out into the room. I heard a noise a couple of evenings ago which I initially had thought was just a log falling over in the firebox. However, I now think that it was some kind of debris falling down the flue pipe from inside the chimney and causing a partial blockage of the wood burner outlet. I won’t be able to find out for sure until tomorrow when the fire is out and I just hope that it turns out to be nothing too serious. I don’t fancy having to do any more repair work on the chimney for a while and just hope that maybe it’s a large lump of mortar or something like that that has become displaced. What worries me is that if I’m right about debris falling down, whatever it is must have come from pretty high up. The flue reaches almost to the top of the chimney (I think), so I just hope that it’s not something to do with the repairs that I recently did. Anyway, all will be revealed tomorrow, which will for the most part be another dry day, if not as sunny as today was.